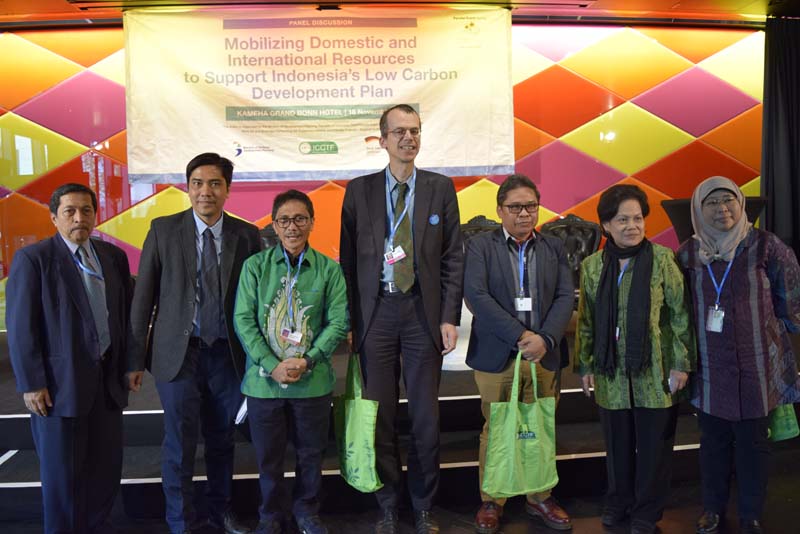 As early as in 2009, Indonesia has started to take an active stance in addressing climate change, by announcing its voluntary commitment to reduce GHG emission by up to 26% from domestic resources, and a further 15% based on the provision of international support. In 2011, national mitigation and adaptation action (RAN-GRK and RAN-API) were adopted to implement these objective, and correspondingly, followed by the development of provincial-level actions plan (RAD-GRK) in the 33 provinces of Indonesia. Along with this, Indonesia established the RAN-GRK and RAN-API secretariat to coordinate RAN-GRK and RAN-API implementation and support local governments in the implementation and monitoring of their mitigation action plans. Meanwhile in 2009, GOI decided to establish a national climate fund, the Indonesian Climate Change Trust Fund (ICCTF), as a way to pool and coordinate grants from various sources to finance Indonesia’s climate change policies and programs and to ensure that international and private sector support is harmonized and aligned with national development plans.

In order to integrate the efforts in reducing GHG emission with whole sectoral and regional development plans, the Government of Indonesia currently is in the process to develop the Low-Carbon Development Plan by refining its regulation concerning GHG emission action plans (Presidential Regulation No. 61/2011) and its National Adaptation Plan (RAN-API). The LCDP is also in-line with the Sustainable Development Goals (SDGs), respectively Goal 1 concerning poverty, Goal 8 concerning decent jobs and economic growth, and Goal 13 concerning climate action. Through the development of LCDP, it is expected that Indonesia will succeed in meeting its GHG emission reductions targets while also increasing the economic growth and achieving the poverty alleviation target. It is expected that the LCDP will be harmonized with the next development plan (RJPMN 2020-2024) and therewith become the planning framework for the years ahead. Thereby, the LCDP intends to directly response to the Paris Agreement, specifically Art. 4/4, which encourages countries “(…) move over time towards economy-wide emission reduction or limitation targets (…)”.

However, to manage the transition various needs to be addressed. This encompasses on the one hand in the short-term support in terms of technology transfer, capacity finance. In the long-term this will require predictable long-term finance at a rate that corresponds with the status of the country and respects the principle of country ownership. While, the establishment of the Green Climate Fund is a positive in this manner, stringent accreditation requirements and complicated and lengthy proposal approval process, limit the potential of this instrument. There is thus an apparent mismatch between international requirements and domestic needs.

The workshop pick up thus question by introducing Indonesia’s Initiative on the Low Carbon Development Plan (LCDP), reflecting on status and progress on Indonesia’s pre-2020 target, and deep-dive on the question of and in what manners international finance can play role to support the domestic low-carbon development. The workshop hosted on November 16th at Grand Kameha Hotel, Bonn during UNFCCC-COP 23 by the National Development and Planning Agency (BAPPENAS), Indonesia Climate Change Trust Fund (ICCTF) and supported by GIZ. The workshop held as a parallel event to the annually conference with the objective to discuss LCDP and how the government intends to move from the planning towards the implementation stage.

The workshop present in a form of panel discussion, consisting of two sequential sessions. Objective of the session is to introduce Indonesia’s initiative on Low Carbon Development Plan (LCDP) and present how it intends to move from the planning to the implementation stage. Indonesian stakeholders present ongoing initiatives on mitigation and adaptation and dig into their best practices and or best models.