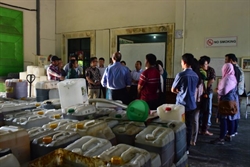 The ICCTF secretariat team, together with the representatives from Directorate of Environment of Bappeans, RAN-GRK and GIZ visited Yayasan Lengis Hijau (YLH) in Bali to learn the process of turning used cooking oil into biodiesel.

Endra Setyawan, Director of Yayasan Lengis Hijau said that the biodiesel is sold to hotels as main fuel for generator set, land mower, etc. Meanwhile, the liquid soap is sold as car and motor shampoo. The time needed for the whole process to finish can take one full day, from the used cooking oil as the raw material until it becomes biodiesel or glycerin (soap).

It is expected for the people to be able to see the economy potential from used cooking oil in the future. With this program, international community is expected to recognize the effort of the Government of Indonesia to achieve the target stated under National Action Plan for Greenhouse Gas Emissions Reduction (RAN-GRK)