WEST YENSAWAI, Indonesia — Linani Arifin says she never thought the flapping seagrass growing along the beach in her hometown in Indonesia’s Raja Ampat archipelago would be key to protecting the graveyard of her ancestors. Seagrass, an underwater flowering plant, covers much of the 45,300-hectare (112,000-acre) Batanta Island, where Linani was born and raised. “We call it andoi here,” the 40-year-old tells Mongabay during a visit in March to her village of West Yensawai. Like many in the village, Linani had noticed the gradual erosion spreading along the island’s coast. The seagrass meadows were becoming patchy, while the mangrove thickets were slowly thinning. The biggest red flag, Linani says, was when the coastline had clearly crept close to the only graveyard on Batanta. 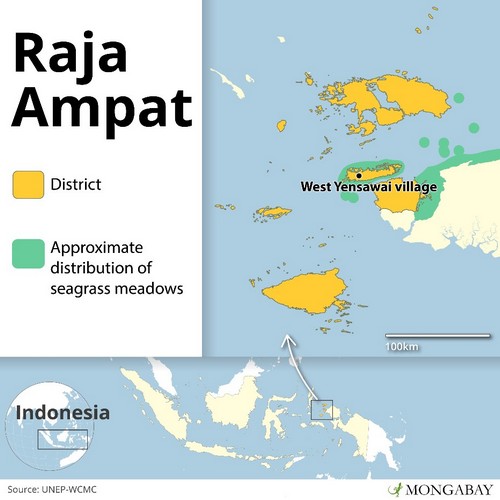 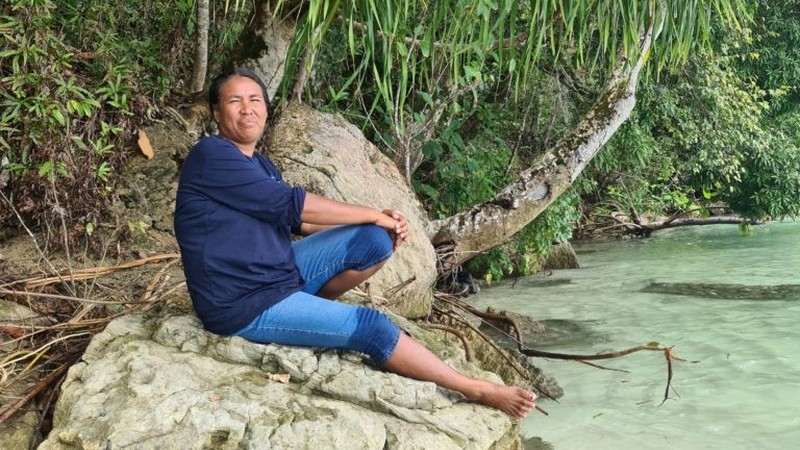 Linani Arifin, 40, is the leader of a seagrass restoration group in West Yensawai village, on the island of Batanta. Image by Basten Gokkon/Mongabay.

Globally, seagrasses are disappearing at rates that rival those of coral reefs and tropical rainforests, losing as much as 7% of their area each year, according to the IUCN. Threats to seagrass meadows come from climate change, pollution, coastal development, and the spread of invasive species. More than 70 species of seagrass worldwide cover a global area estimated at up to 600,000 square kilometers (232,000 square miles) — an area larger than the island of Madagascar. Indonesia is widely considered an important country for seagrass conservation. Researchers in 1994 estimated that the country housed 30,000 km2 (11,600 mi2) of seagrass, perhaps the world’s largest concentration of these marine meadows. But in June 2017, the Indonesian Institute of Sciences (LIPI), a government-funded research agency, put the country’s seagrass cover at just 1,507 km2 (582 mi2). Seagrass restoration initiatives are widely considered to benefit coastal ecosystems and communities, especially in the face of increasingly frequent temperature extremes and storm events that are expected to exacerbate seagrass mortality.

In West Yensawai, Linani has since March 2021 led a group of teenagers working to transplant seagrass seedlings. The group, organized by the Indonesia Climate Change Trust Fund (ICCTF), under the Ministry of National Development Planning, with funding from the World Bank, is part of the island’s coastal ecosystem restoration initiative that also includes mangroves and coral reefs. The hope is that when these three key indicators of a healthy coastal ecosystem — seagrass, mangrove and coral reef — are well managed, they can slow down coastal erosion and its devastating impacts on small islands like Batanta, says Almira Nadia Kusuma, a marine scientist at the Marine and Coastal Resources Research Center of the Bogor Institute of Agriculture (IPB), one of experts directly involved in the seagrass group. “Seagrass conservation is not easy, even in Indonesia, as there isn’t yet truly accurate guidance that can be applied in all locations,” Almira says. “But I’m grateful for the people of Yensawai who have such conservation spirit and eagerness to learn.”

It took a few technique adjustments until the group could start planting en masse without big waves uprooting the seedlings and washing them out to sea. They also changed the containers in which the seedlings were planted, from non-biodegradable plastic bags to baskets made from woven pandan palm fronds. This helped both reduce costs and ensure zero plastic waste. Linani says the group plants new seagrass seedlings once a week at low tide, and measures growth every two week, regardless of the tide. The group has now covered 1,250 square meters (13,450 square feet) with seagrass at a site that’s a short walk off the beach. In addition to seagrass, the coastal rehabilitation initiative in Yensawai has also replanted 1,000 m2 (10,800 ft2) of mangroves and 100 m2 (1,080 ft2) of corals. “I once saw a dugong when I was measuring the seagrass,” Linani tells Mongabay. “Usually it appears during high tide. I’ve seen turtles as well.”

The plants, which are distinct from seaweed, grow in shallow coastal regions, providing a crucial nursery habitat for young fish of many species. Previous reports suggest that more than 600 species of fish in Southeast Asia alone rely on these meadows for their growth and development. Seagrass beds are also an important home for marine invertebrates, such as sea cucumbers, prawns and crabs. Some seagrass meadows also serve to store large quantities of so-called blue carbon, the carbon dioxide absorbed by the world’s oceans and coastal ecosystems. It’s been estimated that seagrass meadows may be able to store more CO2 in their roots than all the world’s rainforests. “Seagrass also works as sediment and debris entrapment underwater,” Almira says. “Because coral reefs aren’t able to adapt to murky waters, seagrass helps catch sediment and debris so that the waters get clearer further out to sea.” 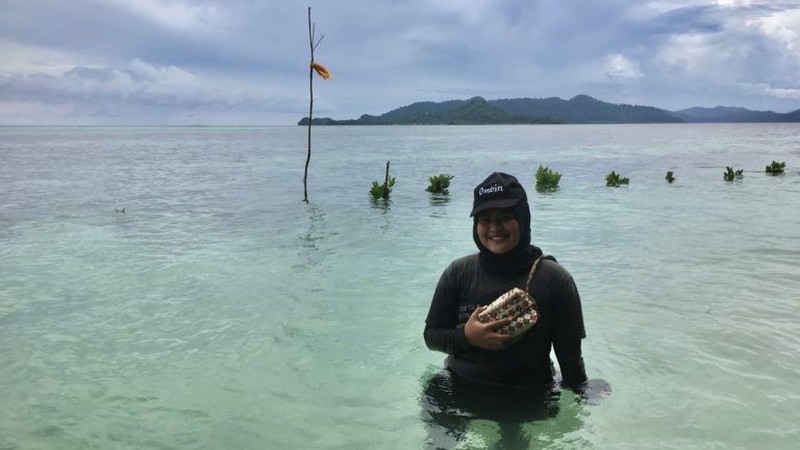 Almira Nadia Kusuma, a scientist at the Marine and Coastal Resources Research Center of the Bogor Institute of Agriculture (IPB), one of experts directly involved with the seagrass group in West Yensawai. Image by Basten Gokkon/Mongabay. 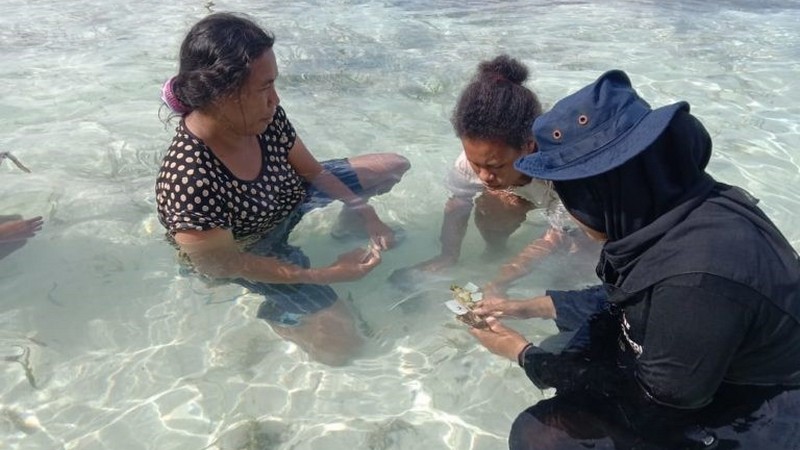 Linani and Almira lead a group of teenagers in West Yensawai working to replant seagrass seedlings. Image courtesy of PKSPL/IPB.

Tonny Wagey, director of the ICCTF, says he hopes the seagrass rehabilitation in West Yensawai can contribute to the protection of the wider Raja Ampat archipelago marine ecosystem, and as well the Coral Triangle, home to the highest diversity of corals and reef fishes anywhere on the planet. “The global concern for Raja Ampat is how to ensure that this isn’t damaged, especially due to the impacts of the climate crisis,” Wagey says.

The seagrass restoration group is currently comprised of 19 girls and two boys, all in their teens, up from from 16 teenage girls when it was first created. Linani says her initially focus in recruiting girls was because she wanted them to learn early on about marine conservation so that they might consider a future career in it, just like Almira, the IPB scientist. “When they move forward with their studies, I will find new kids to help me plant the seagrass,” Linani says.

For Almira, the seagrass planting group in West Yensawai has raised new hopes for a better conservation future for the plant and also inspired a brighter future for women in conservation. She says she hopes there will be more community-led conservation efforts across Indonesia with the support of local governments. “If more communities have the same spirit like Linani, I believe seagrass conservation will continue to develop not only in Yensawai but elsewhere,” Almira says.

Women are leading the seagrass conservation effort in West Yensawai, in the Raja Ampat archipelago. Image courtesy of PKSPL/IPB. 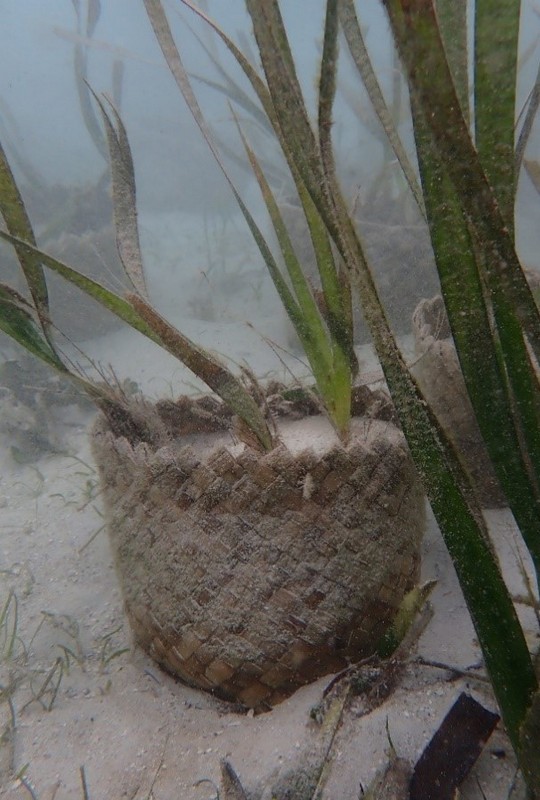 The seagrass seedlings are planted in baskets made of woven pandan palm fronds, to keep costs down and reduce marine waste. Image courtesy of PKSPL/IPB.