ICCTF 2015 Board of Trustees Meeting 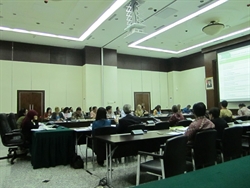 The annual ICCTF Board of Trustees Meeting was held at the Ministry of National Development Planning on 19 June 2015. On this occasion, ICCTF and USAID signed a grant agreement to award 5 million USD to the government of Indonesia to show the United States of America’s support of Indonesia’s effort in reducing the impact of climate change.