RAJA AMPAT, Indonesia — Esterlita Jabu says she still remembers the gut-wrenching horror of hearing explosions from blast fishers near the beach where she played as a child with her friends. “Not only you could hear it, but also you could feel the vibrations,” she tells Mongabay during a visit to her village on the island of Mutus in Indonesia’s Raja Ampat archipelago. Today, 33-year-old Esterlita is a member of the island’s community volunteer group that patrols the waters for illegal and destructive fishing. Methods such as blast fishing and cyanide fishing flourished in the waters of Raja Ampat since the 1980s in response to rising commercial seafood demand. By 2006, illegal, unreported and unregulated (IUU) fishing accounted for 20% of the total reef fish catch. These practices have also been blamed by local fishers for causing declines in fish catch and posing the greatest threat to fisheries resources. 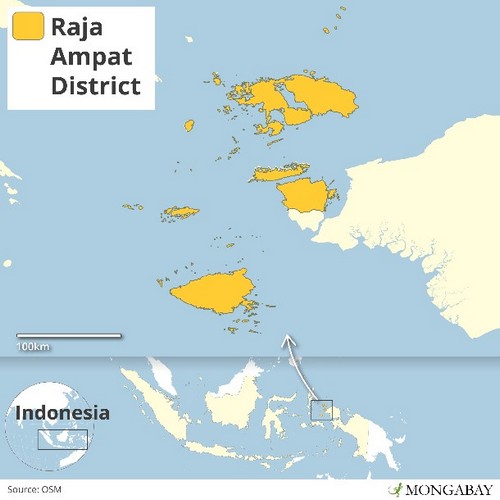 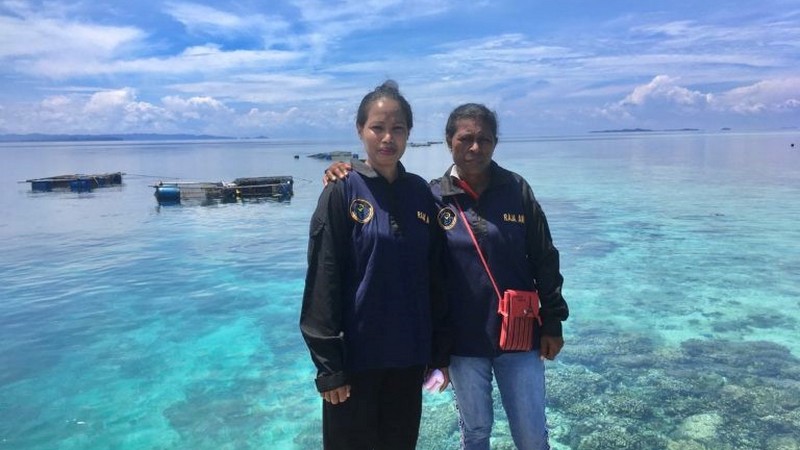 Esterlita Jabu, left, is a member of the Pokmaswas, a community-run marine surveillance group, on Mutus Island in Indonesia’s Raja Ampat archipelago. Image by Basten Gokkon/Mongabay. Indonesia’s marine area covers 5.8 million square kilometers (2.2 million square miles) and is home to the highest coral reef fish diversity in the world. High levels of monitoring, surveillance and enforcement are needed to effectively prevent destructive fishing and protect marine resources, experts say. However, regular patrols are costly and limited due to lack of infrastructure and human resources, especially for a massive archipelago like Indonesia with its thousands of islands. The fisheries ministry says it would “ideally need” at least 78 boats, or more than double what it currently operates, to monitor the country’s waters against illegal and destructive fishers, both foreign and domestic. Other government bodies that patrol Indonesia’s waters include the Navy, the Coast Guard, and the National Police. Budget cuts at the fisheries ministry in recent years have also led to a reduction in total patrolling time, according to a report by the Indonesian Traditional Fishermen’s Union (KNTI). The ministry’s patrols dropped to a total of 84 days in 2019, from 270 days in 2015, the group reported. 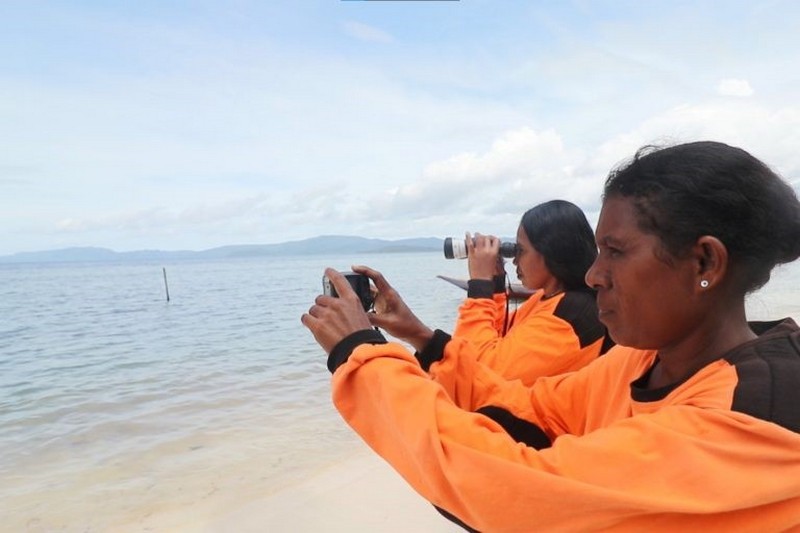 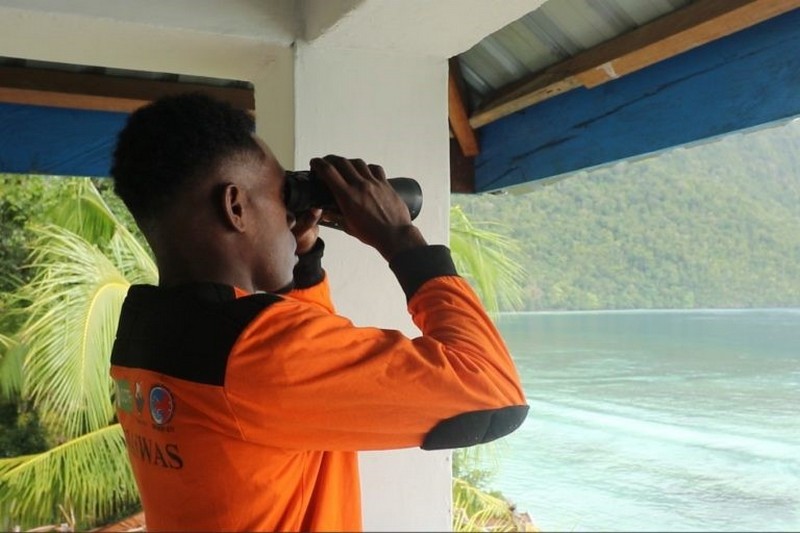 When they’re not patrolling at sea, members of the Pokmaswas monitoring group on Mansuar Island keep an eye on their coast from a watch tower. Image courtesy of the Indonesian Coral Reef Foundation (Terangi).

The Raja Ampat islands are peppered across a 46,000-km2 (17,800-mi2) expanse of water in the Pacific Coral Triangle, a global epicenter of marine biodiversity that covers parts of Indonesia, Malaysia, the Philippines, Papua New Guinea, Timor-Leste and the Solomon Islands. The official patrol staff for the archipelago number 47 individuals, according to Raja Ampat authorities. Syafri, head of the Raja Ampat Islands Marine Conservation Park management, says this figure is far from ideal for carrying out effective monitoring against illegal and destructive fishing in the archipelago. “What we truly need is patrolling teams, and underwater monitoring teams to constantly monitor the underwater ecosystem,” Syafri tells Mongabay.

In Mutus, Esterlita and 19 other people from her village have since March 2020 volunteered as members of Pokmaswas, a community-run monitoring group, to help patrol the island’s waters. Pokmaswas groups are found throughout Indonesia, part of a government initiative that began in 2001. On Mutus Island, however, Esterlita’s group was formed as part of a grant from the Indonesia Climate Change Trust Fund (ICCTF), under the Ministry of National Development Planning, with funding from the World Bank. “The highest level of effectiveness in managing conservation areas is when the people are involved in the management itself and involved in surveillance, and experience for themselves the impacts of conservation,” says Idris, the head division for coral reef resource management at the Indonesian Coral Reef Foundation (Terangi) and one of the experts directly involved with Pokmaswas groups in Mutus and elsewhere.

In Raja Ampat, the ICCTF has created nine Pokmaswas groups on five islands, with each group comprised of 10-20 fishers, both men and women. Their task, as Esterlita puts it, is to “see, hear and report” to authorities on potential illegal and destructive fishing activities. The reports are submitted to a WhatsApp group that also includes representatives from the marine police, the park agency, and the Navy. These authorities can then respond immediately to the reports for further investigation and potential arrests.

The Pokmaswas groups carry out scheduled patrols at least twice a week, covering the fishing waters around their home island and a few neighboring islands. They leave at around 8 in the morning and return by noon, covering areas not covered by the official Raja Ampat patrol teams. The fisher groups typically use their own boat for the patrols, but they’re provided with equipment such as binoculars, walkie-talkies, camera phones, and logbooks. They also have onshore monitoring towers that allow them to observe the coast outside the scheduled patrolling days. Mongabay spoke to some of the Pokmaswas members on four islands, all of whom reported zero fishing violations since the groups were formed. “It seems that they know we are doing patrols now and so they’re avoiding this area,” says Sefnat Watem, 69, a Pokmaswas member from Sauwandarek village on Mansuar Island. 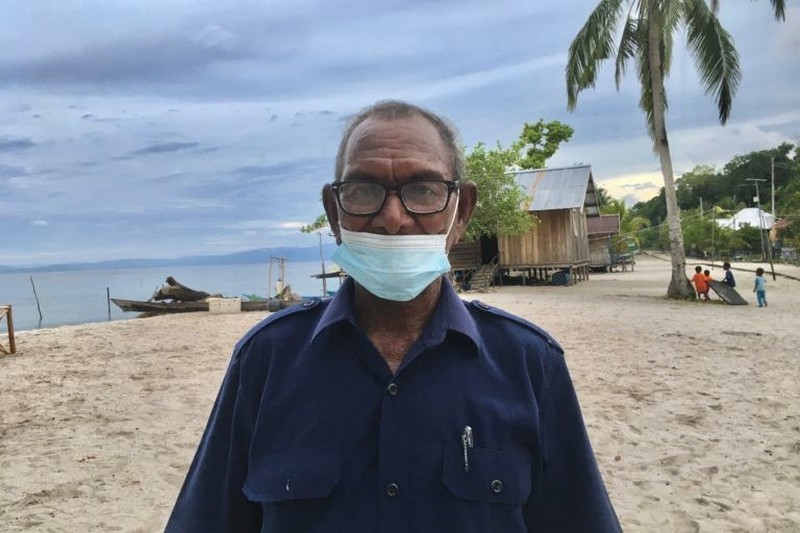 When they’re not patrolling at sea, members of the Pokmaswas monitoring group on Mansuar Island keep an eye on their coast from a watch tower. Image courtesy of the Indonesian Coral Reef Foundation (Terangi). 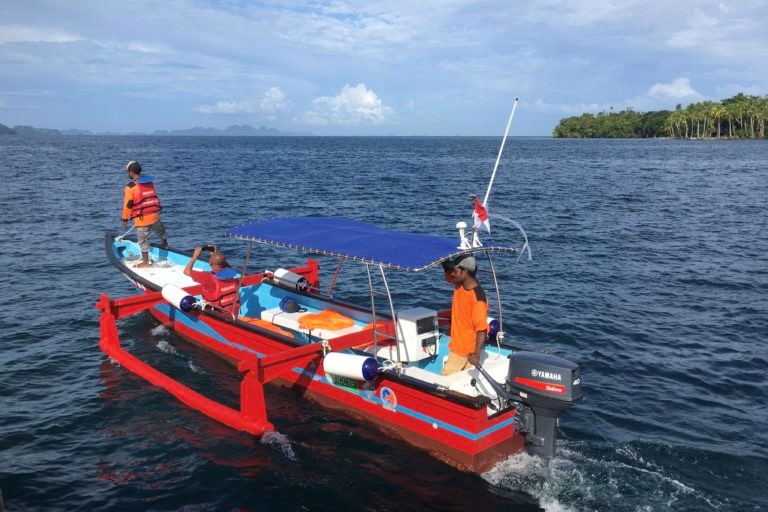 The Pokmaswas on Misool Island conducts patrols twice a week to protect its waters against illegal and destructive fishing. Image by Basten Gokkon/Mongabay.

Syafri, the Raja Ampat park management head, says illegal and destructive fishing practices have declined by 70-80% over the past three years. He added that reports from the community patrols had thwarted several attempts at illegal fishing practices during that time. “Pokmaswas has served as the eyes and ears of the authorities,” he says.

The nine Pokmaswas groups in Raja Ampat are currently in the process of being registered with the fisheries ministry. This effort is expected to help sustain their patrols and cover expenses such as fuel and boat maintenance. Indonesia currently has 2,945 government-registered Pokmaswas groups across its 34 provinces, according to data from the fisheries ministry. Seventeen of them are in West Papua province, where Raja Ampat is located. “Being registered in the government might get them funding from the provincial budget or even the village fund,” says Tonny Wagey, director of the ICCTF, referring to a government program of unconditional cash transfers for each of the country’s 74,900 villages.

The fisheries ministry says it encourages more fishers across the country to be part of their local Pokmaswas, and has promised more funding to provide monitoring facilities and equipment for these groups. The ministry also says it has given special awards to members for outstanding work. “In combating illegal fishing, we’re faced with the challenge of Indonesia’s expansive waters while our personnel and capacity are very limited,” Adin Nurawaluddin, the ministry’s director-general of marine and fisheries resources surveillance, tells Mongabay in an interview. “That’s why public participation in surveillance is very much needed,” he adds.

Fitriani Banlol, 26, says it’s a special feeling to volunteer as a Pokmaswas member. She’s the only woman in her 10-member Pokmaswas in Harapan Jaya village, on the Raja Ampat island of Misool. “It’s such a point of pride for me to get to protect my sea,” she tells Mongabay. “The livelihoods of the Misool people depend on the sea.” 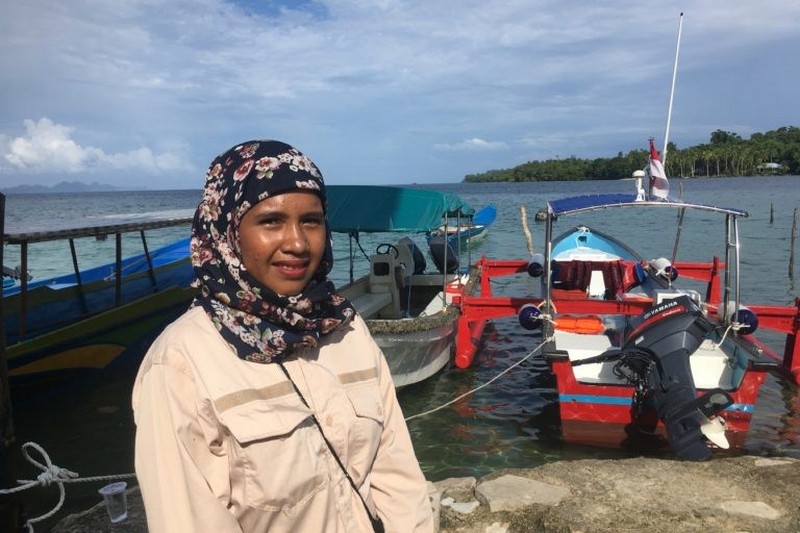 Fitriani Banlol is a member of the Pokmaswas, a community-run monitoring group, on the island of Misool in Indonesia’s Raja Ampat archipelago. Image by Basten Gokkon/Mongabay. 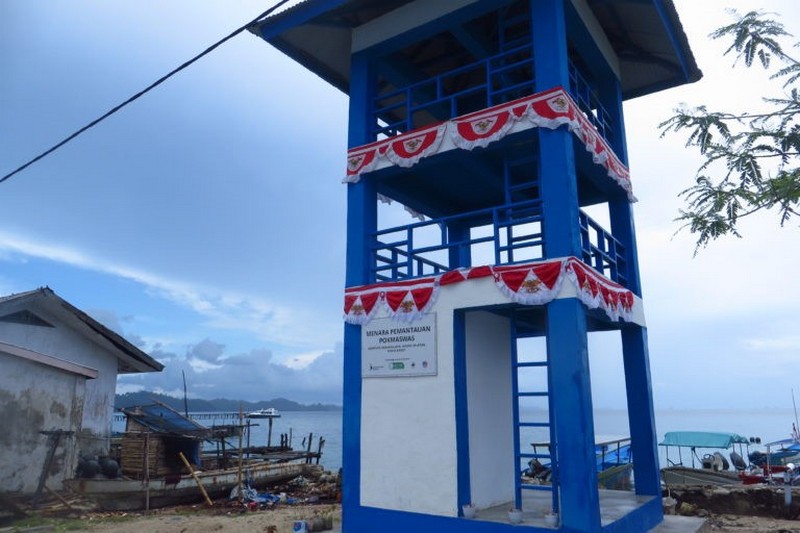 A watch tower for the Pokmaswas monitoring group on Misool Island. Image by Basten Gokkon/Mongabay.